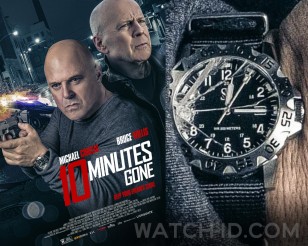 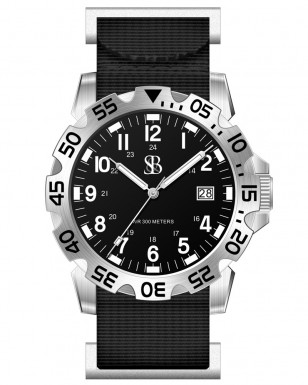 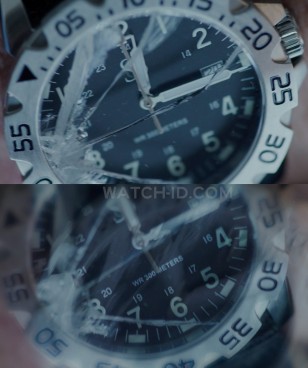 Close-up of the watch in Ten Minutes Gone.
photo ©

In the film, actors Michael Chiklis and Tyler Jon Olson play brothers Frank and Joe who specialize in bank robbery. They wear the same watches early in the film and the watch gets several close-ups and symbolizes the 'ten minute gone' that are the premise of the film.

If you have an idea about the brand and model of the watch, contact Watch-ID here. UPDATE: I was able to Identify this as a S&B SANS-13 watch (by chance I stumbled upon the brand via an Instagram advertisement).

The 42mm stainless steel watch is powered by a top-shelf Swiss Quartz movement designed by the renowned Swiss maker Ronda. The watch itself is designed and built in the USA. Find out more about this brand on the S&B website.

It has a black nylon NATO strap, a black dial and a bezel with minute markings. The hour markings are large with small 24-hours markings next to it. The dial features a date window at the 3 o'clock position and the text "WR 300 METERS".

10 Minutes Gone sees Michael Chiklis playing a man trying to piece together a missing 10 minutes lost from his memory during a bank heist gone wrong in order to find out who sabotaged him. Bruce Willis also stars in this indie action film.