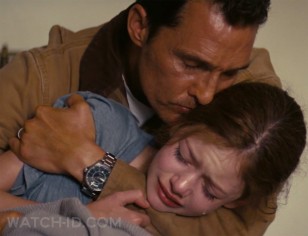 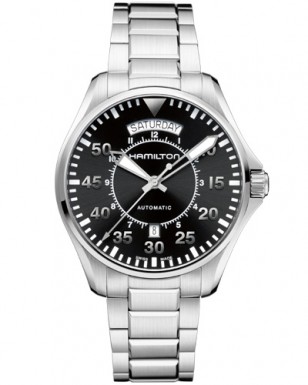 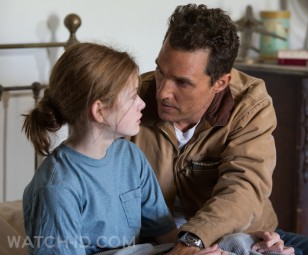 Time plays a critical role in the film Interstellar, a science fiction adventure film directed by Christopher Nolan. Hamilton worked hand in hand with the production team to design a unique Hamilton timepiece for the character Murph (played by Mackenzie Foy and Jessica Chastain), and provided the Hamilton Khaki Pilot Day Date to outfit Cooper (played by Matthew McConaughey).

The exact model that McConaughey wears is the Hamilton Khaki Pilot Day Date Automatic H64615135. This watch can be found at watch boutiques that sell Hamilton, or online at the official Hamilton website, on Amazon.com or on Amazon.co.uk for £593. On eBay you can find several of these watches on offer as well.

Hamilton has been featured in over 400 films, using it’s watchmaking knowledge to help movie makers create the perfect watches for their characters. Get this jacket now while it's still available, (update 2020: it looks like a slightly diffferent but very similar style available on Amazon for $79 - 99).