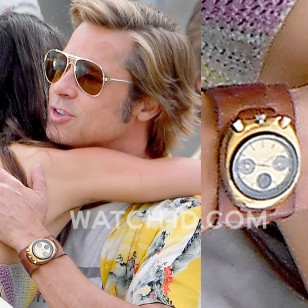 Brad Pitt wears a vintage gold Citizen 8110 Bullhead watch in Once Upon A Time In Hollywood.
photo ©
Sony Pictures Releasing 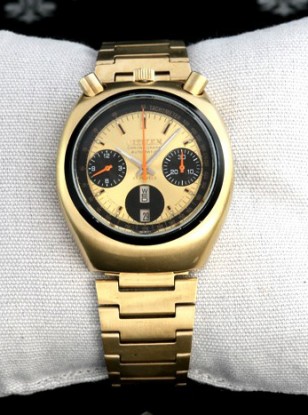 Watch-ID.com is proud to be the first to ID Brad Pitt's vintage gold Citizen 8110A Automatic Bullhead watch in Once Upon A Time In Hollywood (2019).

The vintage Citizen 8110 Bullhead watch has a gold case, gold dial with three black subdials. The watch is nicknamed 'bullhead' due to the two buttons that are placed on the top of the watch (with the crown at the 12 o'clock position).

The Citizen 8110 is a vintage watch from the 1970s (the same time that the film is set) and made in Japan. The watch features chronograph, tachymeter indicators and and day / date display.

This watch can be found on eBay for $400 and up depending on the condition. Many variations in other colors are available, as well as more modern versions. The gold version is available with orange or gold hands, we don't know yet which color hands the watch in the film has.

Brad Pitt wears the watch on a wide brown leather cuff band. If you want to buy a cuff band for your Citizen Bullhead, the lug width of the watch is 18mm according to some watch forums. The watch band is claimed by Red Monkey Straps (visit website), a company which has made watches on leather bands for films and series in the past (see our list here) including Brad Pitt's personal custom strap he also wore in Ocean's 13.

Once Upon A Time In Hollywood is the 9th film by Quentin Tarantino and starring Leonardo DiCaprio, Brad Pitt and Margot Robbie. Set in Los Angeles, the film tells the story of television actor Rick Dalton and his stunt double Cliff Booth as they try to get involved in the film industry.