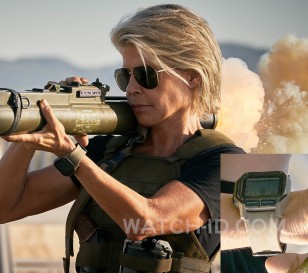 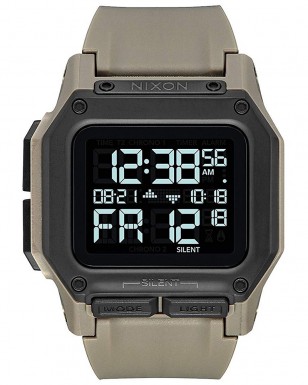 This is one of the cooler watches we've seen in a film lately. The sand color military looking watch fits the rough look and feel of Linda Hamilton's character perfectly, but is also actually made by designer brand Nixon.

Nixon calls it a "Basic Operation” watch, ultra-durable and designed with input from U.S. Special Operations personnel. This shock-resistant and 100m waterproof watch features dual chronographs. It has a 'silent mode', for covert ops, and an inverted screen (light digits on a dark background) with LED backlight.

As can be seen on the picture, the watch is quite big, with a 46mm case.

Get it on Amazon where it's available in a range of colors including Gunmetal, Black and Camo. The Sand color is the one seen in the film.

Or try eBay where there's quite a few on offer.

In Terminator: Dark Fate, Linda Hamilton plays Sarah Connor, the mother of John Connor, who will become the future leader of the Human Resistance in the war against the machines. She hunts and kills Terminators to prevent Judgment Day and forestall the coming conflict. She is at odds with the T-800, due to her previous encounters with its models. Arnold Schwarzenegger once more makes an appearance as T-800 "Model 101" / Carl: an aging Terminator.