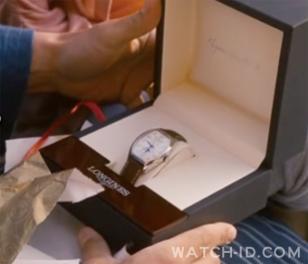 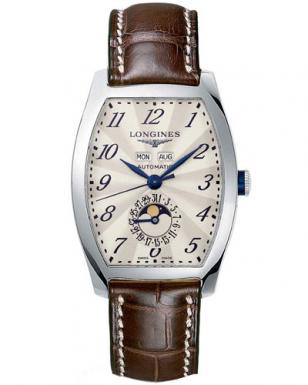 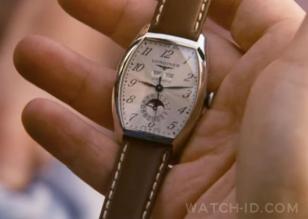 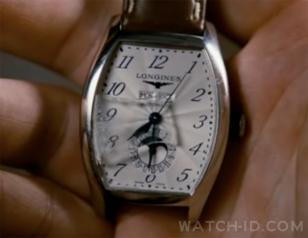 Close up of the Longines Evidenza in a later scene of the movie, the glass is broken and the strap is only attached at the top
photo ©
Paramount Vantage

In the movie White Noise: The Light, the main character Abe, wears a Longines Evidenza watch.

In the opening scene, the watch is given as an anniversary gift to the main character by his wife. The wooden Longines box is clearly shown, followed by an extreme close up of the watch. The brown leather strap of the watch seen in the film looks different from the standard brown alligator strap from this Evidenza model. The back of the watch is shown next, with an engraved text "Nine Years into Forever". Later in the fim, we can see the watch on Abe's wrist and towards the end of the film, the Evidenza watch gets several seconds of screentime when Abe is going through his belongings and finds his watch (which at that point is broken and missing part of the strap).

The Longines Evidenza seen in the film has a stainless steel case, brown alligator strap and Moon phase and day-date features, beautiful silvered flinqué dial, featuring 10 blue Arabic numerals, blue steel hands. reference number L2.671.4.78.4. The date indicator just below the logo shows the day of the week and the month. The subdial in the bottom half shows the moon phase and the date.