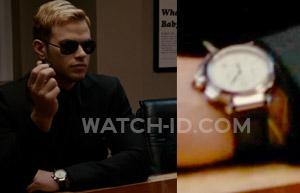 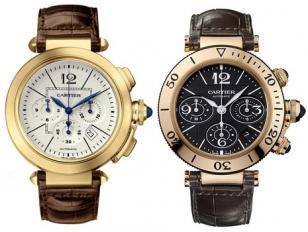 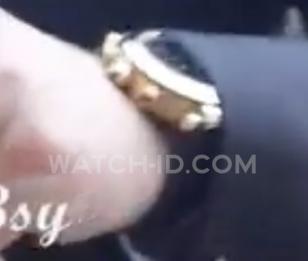 On the set, in this screenshot from a fanmade video, Kellan wears a Cartier Pasha with black dial, round buttons, leather strap

In the movie Syrup, it looks like Kellan Lutz is wearing a Cartier Pasha Chronograph watch. The first screenshots are not very clear but the shape of the case, crown and buttons and the attachment of the band do look like the Pasha.

In a video made by fans meeting Kellan Lutz on the set of the Syrup movie, we can also see the watch. In that video it looks like a Cartier Pasha Seatimer Chronograph Rose Gold W3030018, which can be recognized by large gold crown with black top and the two other round buttons with black tops.

But the watch seen in the trailer of the film seems to be another version, (white?) gold with a white dial and rectangular buttons as opposed to the round buttons, for example the Cartier Pasha Chronograph Yellow Gold, modelnumber W3020151.

Compare the images on the left.

If we find out more about this sighting we'll post it here!

Complete the look
You might also be interested in Kellan Lutz' sunglasses in the film. He wears a pair of black Ray-Ban 8301 Tech sunglasses to complete his cool outfit.