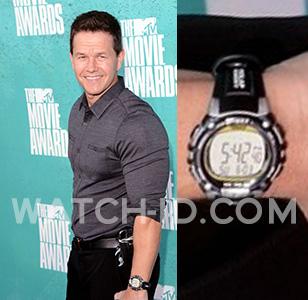 Wahlberg sporting his Timex Ironman during the 2012 MTV Movie Awards 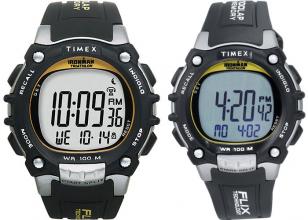 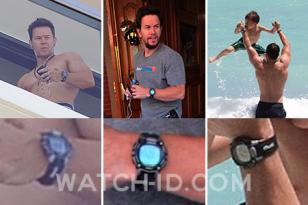 Mark Wahlberg often wears his Timex together with an EFX silicon sports bracelet.

In 2012, Mark Wahlberg is often spotted with his Timex Ironman 100-Lap T5E231 9J watch. He wears the watch in public appearances as well as private moments. Events include the 2012 MTV Movie Awards and the SXSW 2012 Music and Film Festival held at the Vimeo Theater in the Austin Convention Center on Sunday March 11 2012 in Austin, Texas, where Wahlberg participated in “A Conversation with Seth MacFarlane”.

The watch worn by Wahlberg has yellow details on the dial, silver Start button, a black bezel and the texts "100 lap memory" and "FLIX Technology" on the bracelet. Some images of this watch show that text to be yellow, but Wahlberg's watch seems to have white text, maybe there are two versions (yellow text or white text) of this watch. The watch is also available in another blue/grey color (blue bezel and grey dial) and we've seen it with a red case and black bezel once but can't find this one for sale anywhere at the moment.

The Timex Ironman 100-Lap, reference number T5E231 9J is a logical choice for somebody who frequently works out: the sports watch has high-level functionality with a dated training log to store workouts, 100-hour chronograph, 10-lap memory recall, 9 timers and 5 alarms. This Timex has FLIX Technology for hands-free INDIGLO Night-Light operation.

Compared to the pricey watches usually worn by celebrities or seen in films, this Timex watch is modestly priced. Get the best deal on Amazon.com (only $36.18). Also available on eBay (starting from $43).

Mark Wahlberg was spotted in the years 2008 - 2010 with Nike Triax sports watches.

Wahlberg often wears his Timex Ironman in combination with his black/white EFX silicone sports bracelet, see images on the left.
Get the same bracelet on Amazon.