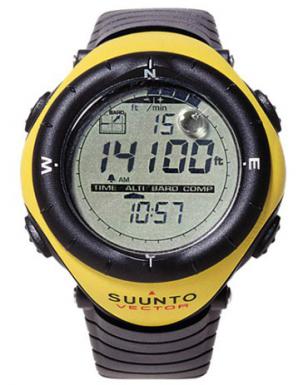 In the movie 127 Hours, actor James Franco wears a yellow Suunto Vector watch. The film is based on the true story of mountain climber Aron Ralston, the American mountain climber who amputated his own arm to free himself after being trapped by a boulder in Robbers Roost, Utah for nearly five days in May 2003.

Suunto is well known for it's range of outdoor watches and the Suunto Vector is probably the most popular version. This yellow Suunto Vector features an Altimeter, Barometer and Compass (ABC). The Altimeter has a vertical speed measurement and altitude alarm. The Barometer has pressure difference measurement and the Compass with leveling bubble for more accurate reading.

A Suunto Vector was also worn by Mark Wahlberg in the movie Shooter.