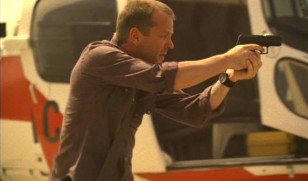 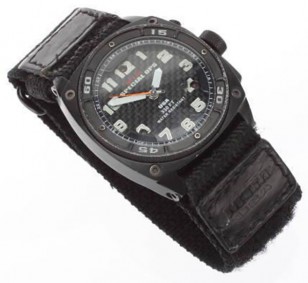 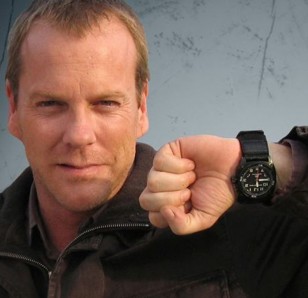 Kiefer Sutherland showing off the MTM Black Hawk watch with velcro strap that he wears in 24.

The MTM Black Hawk Special Ops watch was made by MTM, a leading manufacturer of tactical timepieces made to GSA approved military standards and used by Special Forces and Navy Seals.

Thanks to an auction at Julien's Auctions, we have a great image of the screen used watch.

It's a very interesting watch: the three dots on the dial (at 12, 4 and 8 o'clock) are actually very bright lights. The watch somes with a special battery for these lights, which can be carged on a special charger.

The MTM Black Hawk was worn by Jack Bauer in Season 4 and then also worn in different episodes throughout the end of the series. He always wears the watch with the face down.

This style watch can for example be seen in Day 5: 7:00am – 8:00am (Season 5, Episode 1) during the scene after Bauer has learned that President Palmer (Dennis Haysbert) has been assassinated and decides to come out of hiding after faking his death at the end of the previous season. Jack then grabs his gun and puts on his trademark watch and a pair of sunglasses, symbolically indicating that he is officially back in action.

Apart from numerous other on-screen appearances, this style watch is also featured being worn by the actor in the book 24: Behind The Scenes as well as on the Season 4 DVD box set, and in promotional images for Season 5.

The watch is also mentioned on the media page on the MTM website.

With thanks to Julien's Auctions