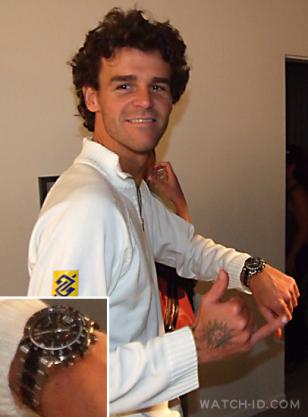 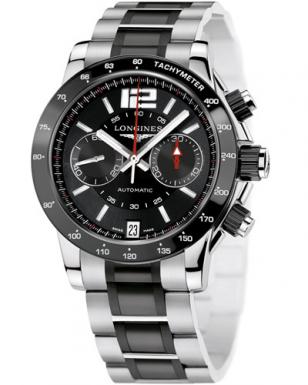 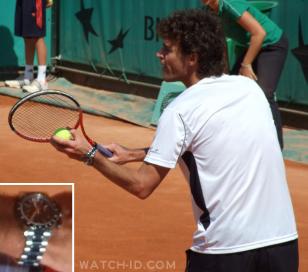 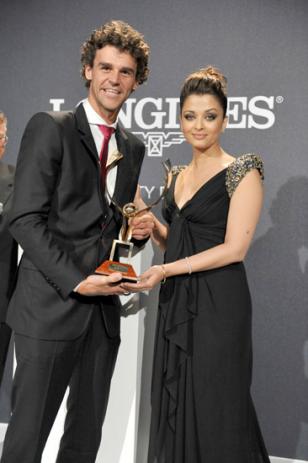 Gustavo Kuerten wears a Longines Admiral Chronograph Ceramic watch. The watch was given to Kuerten by Longines President Walter von Känel, during a press conference at Roland Garros on June 5th 2010. Kuerten received the watch as an appreciation for his charity work. On the same day, Kuerten wore the watch during a mixed double exhibition final, together with Mary Pierce and two young tennis player who won the Longines Future Tennis Aces tournament.

As the official partner of Roland-Garros, Longines organised the tournament, involving 16 children from all around the world, to seek out future tennis champions. Aleksandra Pospelova from Russia and Jaime Fermosell Delgado from Spain won the competition and were able to play in the exhibition mixed doubles final with Gustavo Kuerten and Mary Pierce, both won the Roland-Garros French Open Championship ten years ago. Aleksandra and Jaime will each receive an annual stipend of $2,000 for their equipment from the Swiss watchmaking company, whose aim is to encourage their future in the world of tennis.

Kuerten also wore the Admiral watch during a gala diner at Musée Rodin in Paris that same evening, where he received the Longines Prize for Elegance from Indian film star and Longines Ambassador of Elegance Aishwarya Rai. Kuerten received the prize in recognition of his work with disadvantaged children, notably through his foundation, the Instituto Guga Kuerten.

About the Longines Admiral Chronograph Ceramic
The dial of this self-winding mechanical chronograph is surrounded by a black ceramic bezel with tachymeter engraved graduation scale. Longines’ latest model in its line of sports watches is mounted on a stainless steel bracelet whose central links are also in ceramic. Functions include: hours, minutes, small seconds at 9 o'clock; date at 6 o'clock; chronograph mechanism: central 60 seconds, 30 minutes counter at 3 o'clock.