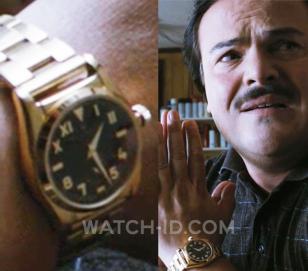 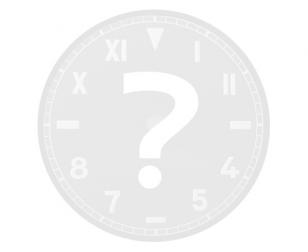 In the movie Bernie, actor Jack Black (as Bernie Tiede) wears a yet unidentified gold watch.

The watch has a California Dial, which refers to a clock face that consists of half Roman (usually 10 o'clock to 2 o'clock) and half Arabic numerals (usually 4 o'clock to 8 o'clock). Sometimes the hours of 3, 6, and 9 are replaced with a dash instead of a numeral and an inverted triangle in place of the 12. The use of this dial style dates back to the 1930s, for example in early Rolexes, Marina Militare and Kampfschwimmer diver's watches. A number of Rolexes were refurbished by a company based in California using this style of dial, and resulting in the name "California dial". Panerai also made watches with this dial, but the watch worn by Jack Black doesn't resemble either the vintage Rolex's or Panerai's.