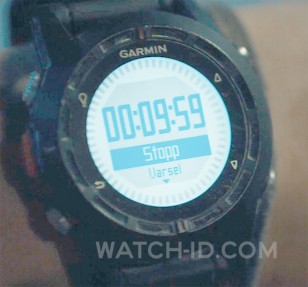 Kristoffer Joner wears a Garmin D2 watch in the film The Wave (2015).

The watch is nothing less than an avionics computer on the wrist. Kristian, Joner's character in the film, uses the timer to countdown 10 minutes, the time the people in a town have to escape from a giant wave casued when a huge mass of rock tumbles into a fjord.

Read all about the Garmin D2 watch on the Garmin website, or buy it on Amazon.com ($399) or eBay.

The D2 has a domed lens to make the screen easy to read in direct sunlight, and a brilliant orange backlight for night flights.

The D2 has customizable displays so you can quickly access the data that's most important to you, including current GPS ground speed, GPS track, distance from waypoints/airports, estimated time enroute, bearing, and glide ratio.

D2 shows you local time and Zulu/UTC time, along with up to 4 different time zones. Enable the stopwatch when you land to keep tabs on your “time off,” and set timers with vibrating alerts to remind you of important tasks, like switching fuel tanks.

The Wave
The 2015 Norwegian catastrophe drama film The Wave (in Norwegian: Bølgen), directed by Roar Uthaug, was Norway's official submission for the Academy Award for Best Foreign Language Film at the 88th Academy Awards but it was not nominated. Reviews for the film have been generally positive.