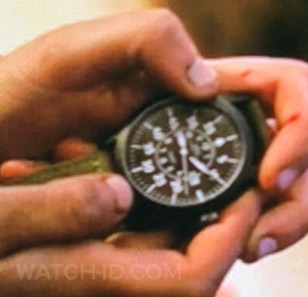 It's not 100% certain which exact model or brand inspired by this old German Pilot watch is worn in the film.

The watch in the film looks like a Aristo Flieger Vintage 42 Type B model 7H117, but it has slightly different markings and the movie watch has a black case.

The Aristo Flieger Vintage is clearly inspired by the Type B Flieger (German for Pilot) watches from the 40s created for the Luftwaffe. A 'Type B' model, the dial is sectored into two, with an outer ring showing large minutes and seconds numerals, and an additional inner circle for smaller hour markers.

The watch in the film also features a date window at the 3 o'clock position, and two lines of text or a logo in the center of the dial.

On Amazon you can find several affordable alternatives for Flieger Type B watches, like the Seiko SNK809 and the Orient FUNG2001B0.

A Quiet Place Part II is a 2021 American horror film, and the sequel to 2018's A Quiet Place, following the family from the first film as they continue to navigate and survive in a post-apocalyptic world inhabited by blind aliens with an acute sense of hearing. The film was written, produced, and directed by John Krasinski for Paramount Pictures.