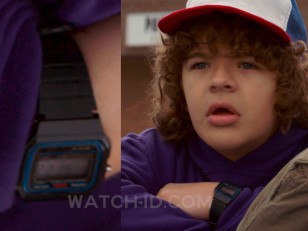 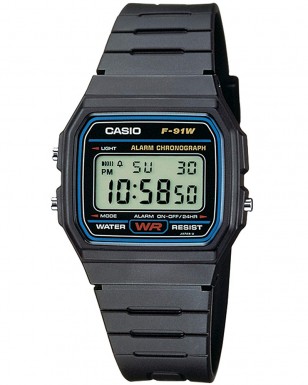 Gaten Matarazzo plays the character Dustin Henderson since the first season of the Netflix series. In the publicity photo from Seassn 2 on the left, it looks like the Casio logo has been removed or blackened out, we're not sure if this is also the case in the actual watch seen in the series.

The F-91W watch is one of the most classic Casio models. It was designed in 1989 and now 30 years later, with exactly the same design, it is still very popular.

There are now many color variations, including pink, gold, blue, yellow, but the most iconic is this black version.

Find it on Amazon.com, Amazon.co.uk, eBay for around $10.

The same watch was also worn by young actors Logan Miller in Being Frank (2019) John D'Leo in The Family (2013) and Nick Robinson in Everything Everything (2017).