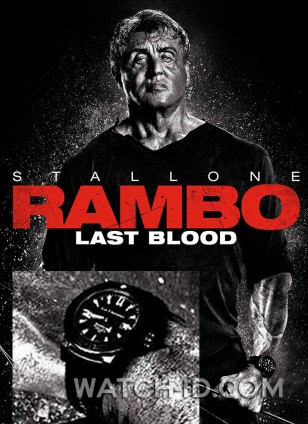 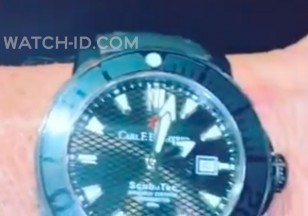 Watch-ID is proud to be one of the first to announce that Sylvester Stallone's watch in Rambo: Last Blood is a Carl F. Bucherer Patravi ScubaTec special edition watch.

The watch can just be spotted on a poster (although not so clearly), in the trailer (also not clear) but more details can be seen on an Instagram post from June 10th. In this behind-the-scenes video an assistent is trying to put on the watch on Stallone's wrist (Stallone jokes it's "obviously a very complicated task") and then we get a quick glance at the face of the watch. In the text of the Instagram post, "@bucherer" is tagged, although that is not the correct handle for Carl F. Bucherer (that would be @carlfbucherer).

The Carl F. Bucherer Patravi ScubaTec seen in the film has a dark pvd case (possibly DLC-coated titanium), dark bezel with matte dark grey (ceramic?) inlay, black dial with the same texture as other Patravi models, one large crown and dark strap. We haven't found the exact model number yet, as there isn't a dark case Patravi at the moment, except for the Black Manta Special Edition, so this is probably a not yet released special edition or a one-off for Stallone.

Carl F. Bucherer has popped up in more movies recently. For example several Bucherer watches can be seen in the latest John Wick film and another Patravi ScubaTec can be spotted in The Meg. It looks like Carl F Bucherer is aiming to get more presence on screen - we're looking forward to see some more of their watches in films and series.

In the 2008 Rambo film Stallone wears a Panerai Luminor PVD (and another Luminor is spotted as well, both exact model numbers not confirmed), while in Rambo First Blood Part II and Rambo III he wears a Chronosport UDT Sea Quartz.

Find on eBay
Buy on Amazon
Buy on JomaShop