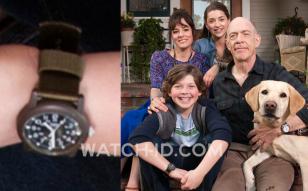 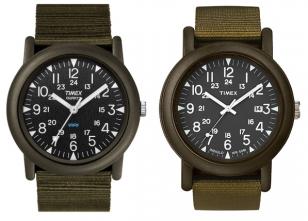 The watch can be seen on a promotional photo for the new series. Although it definitely looks like a Timex Originals Camper, there are some minor differences in the details, which might indicate it's an older or newer model of the watch. For example the words "INDIGLO" and "WR 50M" don't seem to be written on the left and right of the number 6. it also doesn't seem to have the date window at the 3 o'clock location (which the current Timex Originals Camper has, see the right watch in the comparision photo here on the left).

Get the watch on Amazon.co.uk or eBay.