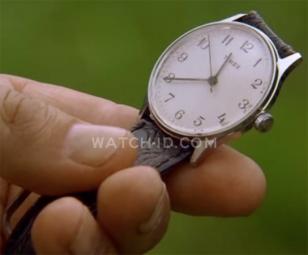 In episode 23 (the final episode) of season 3 of the tv series Lost, we see another Timex wristwatch worn by the character Benjamin Linus (played by Michael Emerson).

In episode 20, during a flashback scene, he wears a Timex Easy Reader (modelnumber T200019J) with white dial and metal band. In the scene in episode 23 (which is not a flashback) he holds up another Timex, which looks like an Easy Reader, but without the Indiglo and WR30 signs at thre bottom of the dial, and no date indication at 3 o'clock, like most new Dress strap or Easy Readers. We're not sure which model this is exactly, but probably an older model Easy Reader.