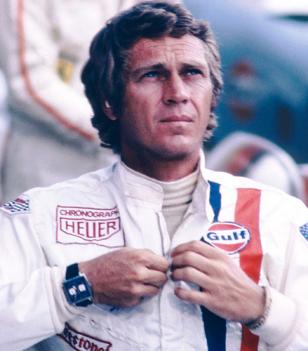 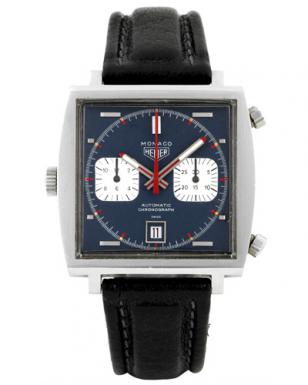 The original Heuer Monaco, worn by Steve McQueen on a photo taken for a recent auction where the watch sold for $87,600 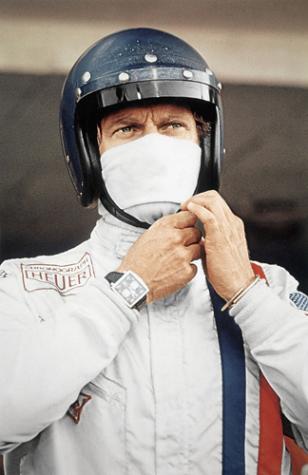 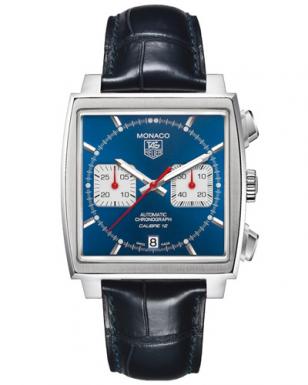 Launched in 1969 the Heuer Monaco was almost instantly made famous, because Steve McQueen chose to wear the watch in the 1971 film Le Mans. Steve McQueen, as racer wears a blue faced, black strap version of the Monaco. In 1969 the brand was still called Heuer (without TAG). At present, the same watch is still available, now branded as the TAG Heuer Monaco Calibre 12 Automatic Chronograph CAW2111.FC6183 (find it on Amazon or eBay). The original watch that McQueen wore during the filming of Le Mans (see image on the left) recently sold for $87,600 at an auction.

2009 Limited Editions
1969-2009: To commemorate this historic anniversary, TAG Heuer has republished this iconic blue-dial timepiece in a limited series of 1,000 pieces with an exclusive case back signed by Jack Heuer and engraved in honour of its mythical ambassador Steve McQueen. Outfitted with the Calibre 11 movement, its other classic features include pushbuttons at 2 and 4 o’clock, crown at 9, counters at 9 and 3, hand-applied date window at 6 o’clock, and diamond-tipped horizontal hours indexes.

Another Limited Edition of the Monaco emphasises the relationship with Gulf, and has the Gulf logo and stripes on the dial, check this one out here.