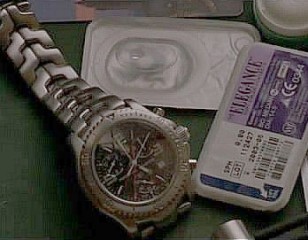 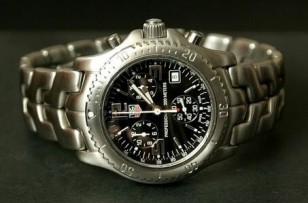 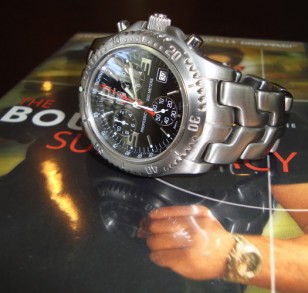 In the Bourne Trilogy, Jason Bourne wears a TAG Heuer Link Chronograph, the model from the year 2001, modelnumber CT1111.BA0550.

in The Bourne Identity and The Bourne Supremacy we can see the watch clearly several times, but in The Bourne Ultimatum, the TAG Heuer gets a little less screentime.

The watch has a black dial, big hour numbers 3, 9 and 12. The later models have a different dial and bezel, so it's difficult to find the exact model as from the movies. Only on eBay or other second hand markets can this one still be found. The newer edition, which has the same modelnumber, doesn't have the 3 and 9 hour markings and instead uses hour indicator lines, and the TAG Heuer logo is white instead of coloured.

The actor who plays Bourne wears the same watch in real life as well, he has been spotted with a TAG Heuer Link on many occasions, see these pages: 1, 2, 3, 4, 5.

In the 2016 movie Jason Bourne, Bourne once again wears a Tag Heuer watch, this time with black strap, black case and black dial, model not yet confirmed.

In the movie The Departed, the same actor wears a TAG Heuer Link Quartz.