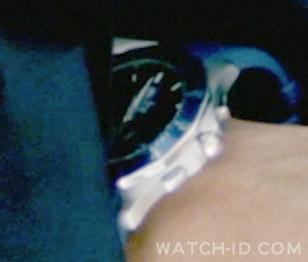 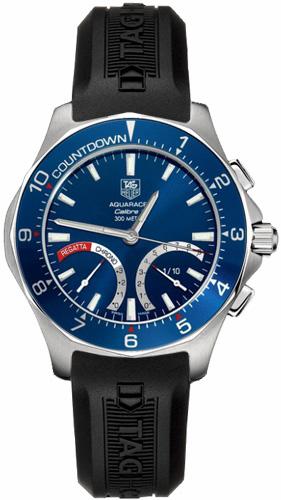 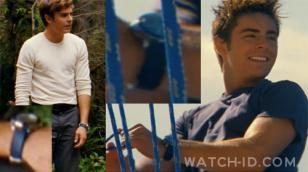 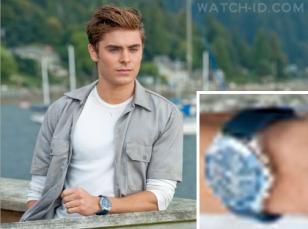 An enhanced close up of the watch shows the crown and two buttons, plus the blue bezel with the numbers 3 and 4 in the same way as an Aquaracer Calibre S Regatta CAF7110. Other images show a blue (rubber) strap, which means the standard black strap was replaced for the movie, maybe with a strap from the Leonardo DiCaprio Limited Edition (which comes standard with a rubber blue strap). This sailor's watch from TAG Heuer is appropriate for Zac Efron's character in the movie who is a fast sailor.

This Aquatimer is available with a metal band (get it at Amazon.com for $1085) or check eBay.

About the Aquaracer Calibre S
The Calibre S allows for time to be read intuitively in a radically innovative, avant-garde fashion: the hour and chronograph functions are displayed by the central hands (hour, minute, second). With no fewer than 230 mechanical components and five bi-directional micro-engines, the Calibre S boasts unique functions:

The Calibre S has three modes: “HOUR”, “CHRONO” and “REGATTA”. A simple push on the crown is all it takes to go from one mode to the next. The three modes are displayed by the central hands (hour, minute, second), making legibility simple and intuitive. With its bi-directional micro-engines, the Calibre S allows the central hands to move anti-clockwise in the “REGATTA” mode. Once the countdown is over, the chronograph is automatically triggered and the central hands start moving clockwise. The dial of the Aquaracer Chrono Calibre S Regatta is adorned with two half-moon counters at 4:30 and 7:30, which indicate different data depending on the mode the watch is in.