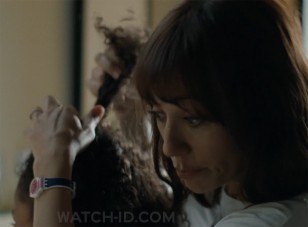 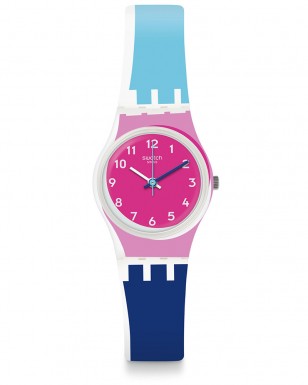 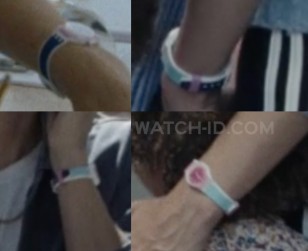 The Swatch Attraverso watch can be seen in many scenes in On The Rocks.
photo ©
A24 / Apple

Rashida Jones wears a Swatch Attraverso LW166 watch in the 2020 movie On The Rocks.

The Attraverso is a typical Swatch watch with its simple shape and bright colors: pink, light blue, dark blue with contrasting white details. Even the hands have different colors, a light blue second hand, dark blue large hand and white small hand, which contrasts niceley with the hot pink dial.

This is a small watch as can be seen on the screenshots, with only a 28mm wide and 31mm high case.

The model was released in Winter 2018 as part of the Core Refresh Collection, but is currently not produced anymore.

The watch can still be found online at some places, for example Amazon or eBay. The price should be around $65 (the official retail price).

The Swatch is not the only watch worn by Rashida Jones i the film. She can also be spotted with a gold watch with black leather strap, during the fancy dinne with Bill Murray's character.

On the Rocks is an American comedy-drama film, written and directed by Sofia Coppola. It stars Bill Murray, Rashida Jones, and Marlon Wayans.

It is the first film produced under the Apple and A24 partnership.