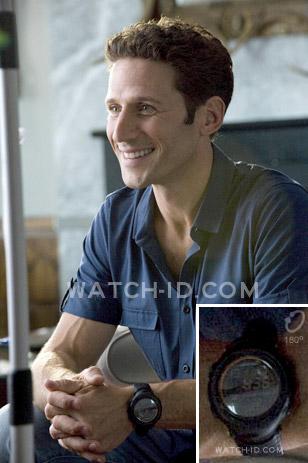 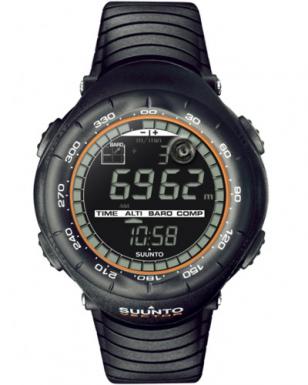 Suunto is well known for it's range of outdoor watches and the Suunto Vector is probably the most popular version. This black Suunto Vector XBlack features an Altimeter, Barometer and Compass (ABC). The Altimeter has a vertical speed measurement and altitude alarm. The Barometer has pressure difference measurement and the Compass with leveling bubble for more accurate reading. The Vector has an incredible list functions, which is the reason why Suunto calls it a wristcomputer.

The Suunto Vector XBlack seen in the series has a negative screen (light numbers and text on a dark screen).

The new Suunto Vector XBlack is available on Amazon.com for $155 (the Vector is available in many color combinations, the one seen in Royal Pains looks like the XBlack version with orange line around the dial). See more Vector variations here.

A Suunto Vector was also worn by Mark Wahlberg in the movie Shooter and a Vector Yellow version was worn in the movie 127 Hours.