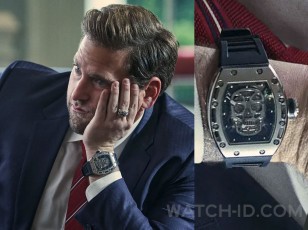 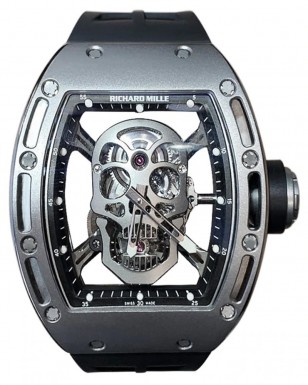 Jonah Hill wears a (replica of a) Richard Mille RM52-01 Skull Tourbillon watch in the Netflix movie Don't Look Up (2021).

The film's costume designer Susan Matheson speaks about the choice for a replica watch on GQ: “It's not a problem getting one of those [watches]. The problem is if the watch should get stolen while we're shooting. I think those watches are worth north of $600,000.” Matheson and Jonah Hill thought the replica actually even suited the character “I actually love that it was fake,” Matheson says. “He is the kind of person who would look like he's wearing a $600,000 Richard Mille watch but actually be wearing a fake. I think it's hilarious.”

An authentic Richard Mille RM52-01 Skull Tourbillon actually costs almost $700.000, and the Skull model is available in many color/material variations for different prices.]

In the same film, Dr. Oglethorpe (played by Rob Morgan) wears a Casio AE1200 watch, while the main character played by Leonardo DiCaprio wears what looks like a Victorinox watch.