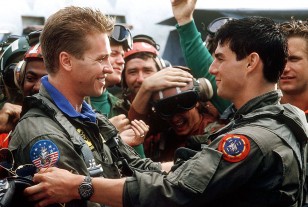 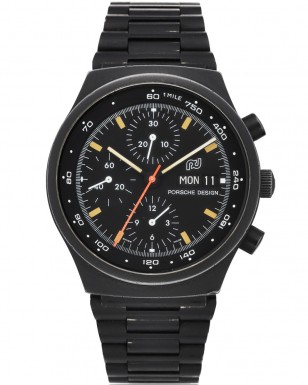 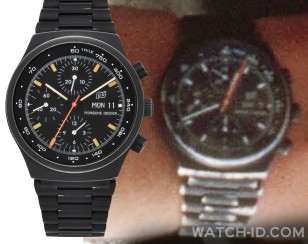 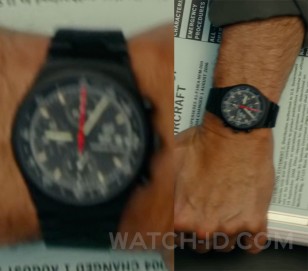 In Top Gun: Maverick, Tom Cruise wears the exact same watch as can be seen in this enhanced image.
photo ©
Paramount Pictures

Tom Cruise wears a Porsche Design Chronograph 1 watch in the movie Top Gun (1986) and he will wear the watch once again in Top Gun: Maverick (2022).

In this article we will show you the EXACT model that Tom Cruise wears in the first Top Gun film.

The Porsche Design Chronograph 1 was the first watch with a black PVD coating, originally launched in 1972 this was a revolutionary watch. Designed by Ferdinand Porsche (designer of the Porsche 911), the watch was produced by Orfina.

There are variations of the watch, with different inner bezels and with Orfina logo and versions with "PD" (Porsche Design) logo.

The close up image on the left shows the exact variation of the Porsche Design Chronograph 1 worn by Tom Cruise: it's the reference number 7750, with on top of the bezel the "60" - "1 MILE" and the PD logo.

In Top Gun: Maverick, we can also spot a lot of IWC watches. IWC provides watches to the real Top Gun school and offers a range of Top Gun branded watches.