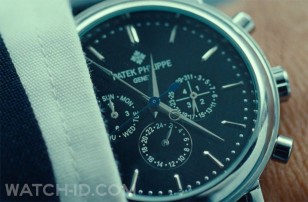 It is not known why the watch in the movie is shown so clearly with the Patek logo, even though this is not an existing Patek watch model. Patek Philippe usually doesn't allow their watches to be shown in films or related to celebrities. Reada discussion on the watch on the Watchuseek forum.

The main character in the film, played by Liam Neeson, wears a (authentic) Casio wave ceptor watch in the same film.