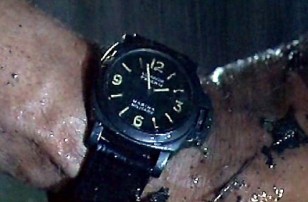 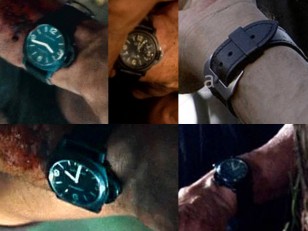 In these screenshots, Sylvester Stallone seems to wear a different Panerai, possibly the PAM0009, in Rambo (2008)
photo ©
Lionsgate

The exact model of the watch in the close-up seems to be a Panerai PVD Luminor Marina Militare 5218-202/A. The watch has a black PVD case and rubber strap, a black dial 3, 6, 9 arabic numerals. But it seems another model is used during filming, seen in other shots, which looks like a PAM0009 model.

Sylvester Stallone is often seen with Panerai watches, both on and off screen, but he also owns many other brands in his extensive watch collection.

Rambo (also known as Rambo IV and John Rambo) is a 2008 American action film directed and co-written by Sylvester Stallone, who also reprises his role as Vietnam War veteran John Rambo. A sequel to Rambo III (1988) and the fourth installment in the Rambo franchise, it is followed by Rambo: Last Blood (2019).