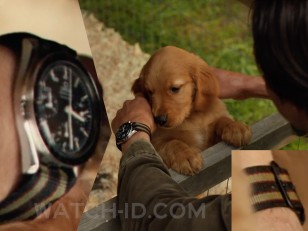 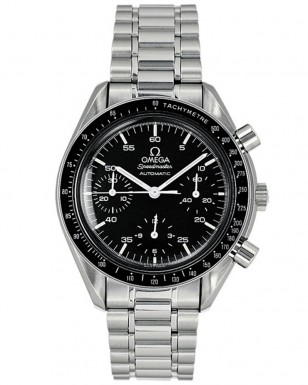 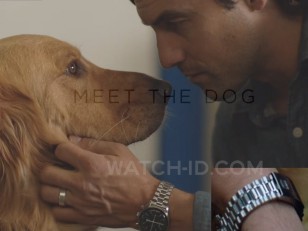 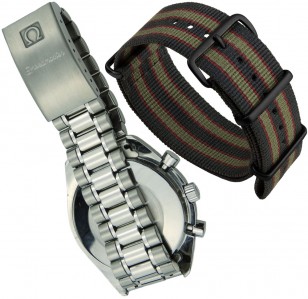 The original steel bracelet and the 'James Bond' Nato strap, both seen on the Omega Speedmaster in the film
photo ©
WatchGecko (Nato strap)

Milo Ventimiglia wears a Omega Speedmaster Reduced 3510.50.00 with two different straps in The Art of Racing in the Rain (2019).

The dial of the watch is more compact, with the subdials closers to the outer hour markings. Also notable are the minute markings (05, 10, 15 etc) inside the hour markers.

The Omega Speedmaster Reduced watch was produced from 1988 until about 2006, and now available only in used watch stores or on eBay for $1000-$1500, a bit less than a regular Speedmaster 'Moonwatch'.

About the straps and bracelet

In early scenes of the film, when the main character Denny Swift (a race car driver played by Milo Ventimiglia) gets his dog 'Enzo', he wears the Speedmaster watch on a 'James Bond' Nato strap: the strap that has become famous as the James Bond Nato strap because Sean Connery wore his Rolex Submariner on a similar strap in the 1964 movie Goldfinger. The strap worn by Connery was actually slightly different from a Nato strap, but the colors of the current 'James Bond' Nato straps are similar: dark blue and green with red lines.

The Nato strap in the film has the dark blue/green/red colors and black PVD hardware (buckle and rings), very similar to (or it even might be) the Watch Gecko Vintage James Bond strap (available here).

Later in the film, the character is wearing presumably the same watch, but then on the original steel Omega Speedmaster bracelet that came with watch.

The Art of Racing in the Rain is a 2019 comedy-drama film directed by Simon Curtis (Woman in Gold, Goodbye Christopher Robin) based on the 2008 novel of the same name by author Garth Stein. The film stars Milo Ventimiglia, Amanda Seyfried and Kevin Costner as the voice of Enzo the dog.

Thanks to Celine Simon at Bob's watches for the 'Reduced' model article and also check out another article about the Speedmaster Reduced on the same website.