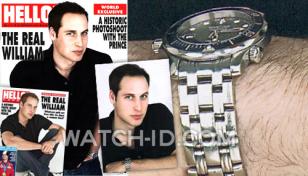 The Omega Seamaster watch could be spotted in an article about Prince William in Hello! Canada.
photo ©
Hello! Canada 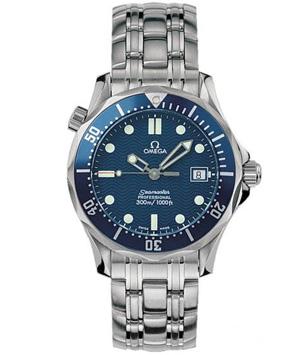 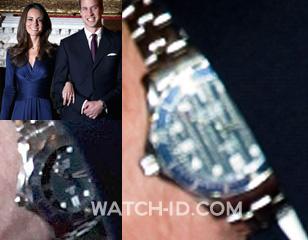 The Omega was cleary visible during a press meeting in November 2010 about the engagement of Prince William with Kate Middelton.
photo ©
misc. sources

Prince William, Duke of Cambridge wears an Omega Seamaster Quartz 300m mid-size. The Seamaster is said to have been a gift from his mother, the late Diana.

Prince William only seems to wear this watch, he has been spotted with his Seamaster for more then a decade and is therefore a great ambassador for Omega, even though he is not an official brand ambassador.

The exact model seems to be a Seamaster Quartz 300M, mid-size, with blue bezel and blue dial, modelnumber 2561.80.00. This model is also known as the James Bond watch due to the appearance of blue Seamaster watches in the Bond movies GoldenEye, Tomorrow Never Dies, The World is Not Enough and Die Another Day. But the watches worn by Bond are the full size Quartz 2541.80 model in GoldenEye and the 2531.80 Automatic in the other Brosnan movies.

William's wristwatch could clearly be spotted in a 2010 article in the magazine Hello! Canada, where he wears the Omega, and during a press conference in November 2010 about the upcoming wedding of William to Kate Middleton on April 29th 2011.

The exact same watch is worn by US President Joe Biden.