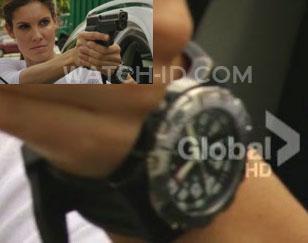 The watch on the wrist of Daniela Ruah appears to be a Luminox 8251 EVO Ultimate SEAL with black case, dial and strap
photo ©
CBS

In the tv series NCIS: Los Angeles, actress Daniela Ruah, as Kensi Blye, seems to be wearing a Luminox 8251 EVO Ultimate SEAL wristwatch in some of the episodes.

Luminox watches are famous for the use of tritium to illuminate the hands and numerals of its products, which gives a bright glow in dark circumstances, even when the watch hasn't been in the sunlight for a while. Luminox was originally designed for United States Navy SEALs, so is an appropraite choice for Daniala Ruah's character in NCIS (Naval Criminal Investigative Service).

According to CBS, the characters Callen and Sam also wear Luminox watches most of the time, series 8800. Sam wears a Blackout model. When they go undercover, they wear a different watch. We have spotted Sam (played by LL Cool J) with a Suunto X-Lander as well.