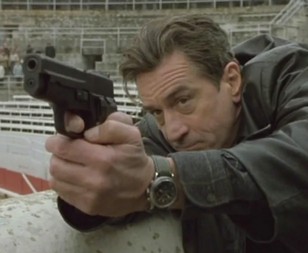 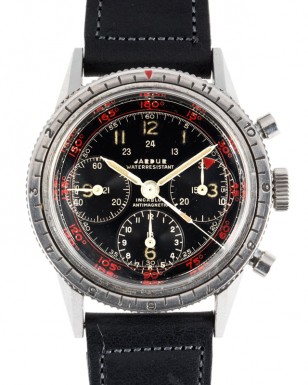 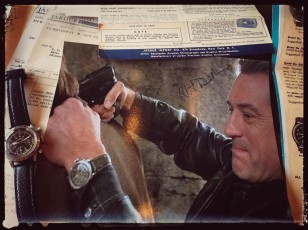 The watch can often be spotted on Robert Deniro's wrist when he fires a weapon.

According to an article on The Watch Spot, the watch was provided by a Parisian watch dealer (the movie was filmed in France).

The Watch Spot website also explains the special features of the Jardur Bezelmeter 960. The watch was designed for use by pilots. The outer bezel can be used as a countdown timer: by aligning the total expected flight time with the hour hand immediately after takeoff, the hour hand points to the number of hours remaining on the bezel as the flight progresses.

The red degreemeter scale on the dial is graduated from 0 to 180 in steps of 15 degrees which can be used by pilots to measure the amount of the turn of an airplane. For example, if the pilot wishes to turn his aircraft 75 degrees, the chronograph is started at the initial point of turning, and for each second that passes the aircraft will have turned 3 degrees. So after 25 seconds, when the sweep second hand is pointing at 75 on the degreemeter scale, the turn is complete.

Jardur watches were made from the late 1930s to the 1940s and sold to pilots. The watch brand has been revived in 2012 and currently sells the Jardur Degreemeter, a watch inspired by the Bezelmeter. A Degreemeter watch is worn by J.K. Simmons in the movie The Tomorrow War (2021).

For more about the brand, visit the Jardur website.