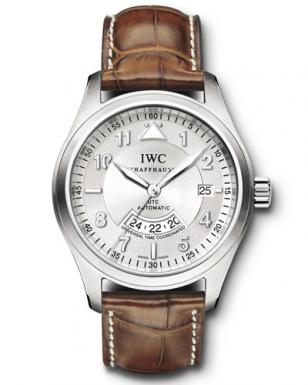 The Spitfire UTC worn in the series has a black dial, black leather strap. UTC  (Universal Time Coordinated) is an international time standard that is identical with Greenwich Mean Time (GMT). It provides a time constant. It is important to pilots and travellers who change continents and time zones in rapid succession, or for business people who communicate with associates all over the world. In the late 1990s, especially for them, IWC began making a reliable wristwatch with two time zones: the Pilot’s Watch UTC with its 24-hour display. On the Spitfire UTC, local time is shown on the dial. This can be advanced or moved back in one-hour steps, even beyond the date. Home time is displayed in a 24-hour display window. In some versions of the Spitfire watch, this display is placed in the top half of the dial, but in the version seen in Rubicon the display is placed in the botton half.