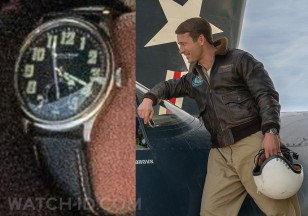 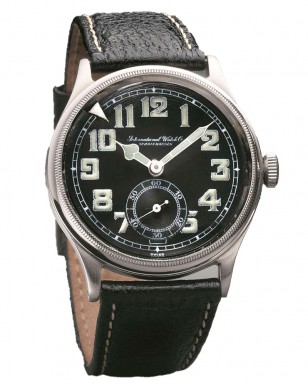 The watch can be clearly seen if we zoom in on one of the promotional photos. The watch shows a round case, black dial, oversized numerals and a subdial with small seconds hand. The little triangle that can be moved with the inner rotating bezel, can be spotted just below the 3 o'clock position. Also we see the heart or 'spades' shaped small hand, and the long logo writing on the top of the dial.

The IWC’s history in aviator’s watches started with this Special Pilot’s Watch ref. 436, also known as the 'Mark IX'. Conceived by the two sons of Ernst Jakob Homberger (1869–1955), the then-owner of IWC, the Mark IX was unveiled in 1936. The watch, containing Caliber 83, had a shatterproof crystal, high-contrast hands and numerals, a rotating bezel with an index for recording short periods of time, and an antimagnetic escapement. It was also highly resistant to temperature fluctuations, ranging from –40 degrees Celsius to +40 degrees Celsius.

You might recognize Glen Powell from Top Gun: Maverick (2022) in which he also played a pilot, Lieutenant Jake "Hangman" Seresin. In that film, several pilots also wear IWC watches.