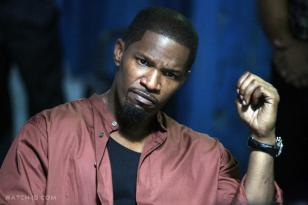 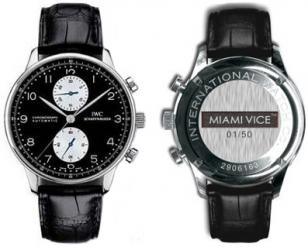 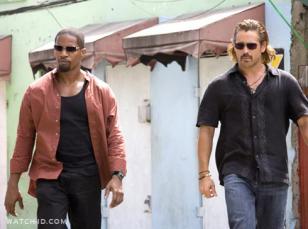 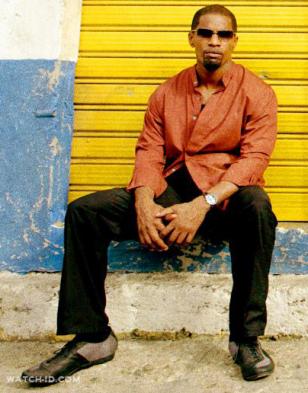 Jamie Foxx wearing a IWC Portuguese Chrono-Automatic in Miami Vice, the two white subdials can be spotted on this shot
photo ©
Universal Studios

Miami Vice liberates what is adult, dangerous and alluring about working deeply undercover. To help reflect the new modern style of both Miami and Miami Vice, the film opted to include two IWC timepieces.

The urbane and street smart Ricardo Tubbs, played in the film by Jamie Foxx, was suited with the IWC Portuguese Chrono-Automatic for the story's daytime scenes. With it's large sleek dial, black face and a silver sub dial, this watch proved to be the perfect fit in helping Miami Vice transition to it's new modern look and feel.

A (very) limited edition of the watch was released by IWC, see image on the left. Only 50 pieces were made, so they are hard to find. The special edition, reference number 371404 included an engraved IWC caseback with Miami Vice logo and number. The current Portuguese range doesn't include a version with white subdials, so if you're looking for the exact version from the film you might be better off on places like eBay.