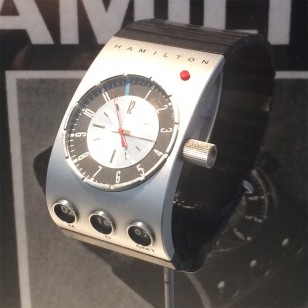 The custom watch that was used in 2001: A Space Odyssey
photo ©
unknown 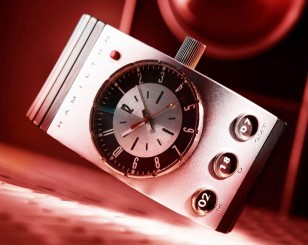 The custom Hamilton watch that was used in 2001: A Space Odyssey
photo ©
Hamilton

In 2001: A Space Odyssey a custom made Hamilton watch can be spotted.

The watch looks like a metal bracelet, with a round dial, red button, and three 'screens' showing numbers, for "Month", "Day" and "GMT".

Director Stanley Kubrick and author Arthur C. Clarke commissioned Hamilton to create the watch to be featured in their film 2001: A Space Odyssey.

When the movie was released in cinemas, Hamilton released a watch to the public, the Odyssee 2001 (spelled differently for copyright reasons) but it didn't look like the watch in the film.

Find the Hamilton Odyssee 2001 on eBay

In the 2000s, Hamilton released the X-01 watch, limited to 2001 pieces, with a retail price of $1195. This Hamilton X-01 watch is cast from Titanium and fitted with four quartz movements and three dials for Home Time, Dream Time and GMT.

Find the Hamilton X-01 on eBay

In January 2022, Hamilton seemed to tease a new release related to the watch, posted on Instagram. Perhaps we'll see another re-issue of a classic Hamilton watch, just as they did with the Pulsar PSR watch?