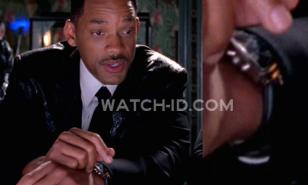 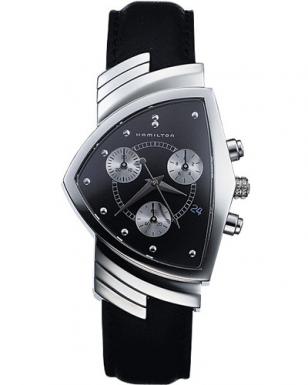 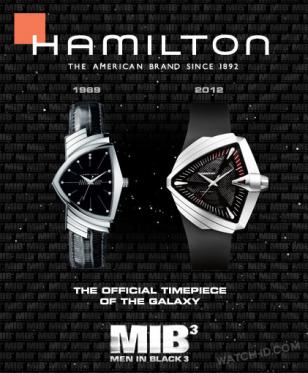 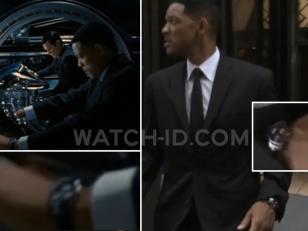 The three subdials are just visble in these screenshots.
photo ©
Columbia Pictures

In the movie Men in Black 3, Will Smith once again wears a Hamilton Ventura medium watch, this time a Hamilton Ventura Chrono featuring three silver sub-dials on the face (reference number H24412732). It is not, as we first thought, the standard version, reference number H24411732, which was the model seen in the first Men in Black movie, with black face, stainless steel case and black leather lizard pattern strap. Tommy Lee Jones, as Agent K, wears a similar watch in MI3.

In the same film, Josh Brolin who plays a younger version of Agent K, wears a Ventura as well, but it seems to be one with a metal band, which might indicate it's a Ventura Elvis Anniversary Edition reference H24481131, although this is not confirmed.

The Young Agent O, played by Alice Eve, wears a ladies version of the Ventura.

The Hamilton Ventura is an all American classic. Elvis Presley was a fan and wore an all steel version in his movie Blue Hawaii. Hamilton watches can be spotted in many films, see more sightings here.

Note the Ventura comes in a range of versions, including a special Elvis Presley limited edition, an XXL modern version (see Hamilton ad on the left) and several sizes, so if you're looking for one, make sure you get the size and model of your preference.

Buy on Amazon
Buy on JomaShop
Find on eBay