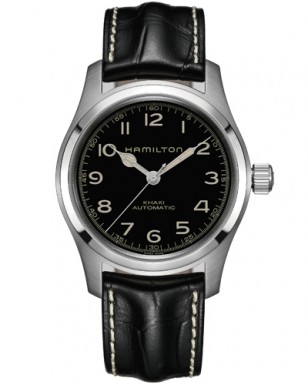 Hamilton created a unique timepiece with the Interstellar movie production team for character Murph, a modifed Hamilton Khaki Automatic. The watch is worn in the movie by Murph (played by Jessica Chastain, Ellen Burstyn and Mackenzie Foy) and can be prominently seen in the film, together with the Hamilton Pilot Khaki Day Date worn by Matthew McConaughey.

The Hamilton Khaki Automatic made for the film is reffered to by Hamilton as the 'custom Murph watch'. It has a steel case, black dial with the words HAMILTON at the top of the dial, and KHAKI AUTOMATIC at the bottom. The hands are similar to the Pilot watch hands. The watch has a black leather band with light stitching. The watch doesn't have a Date window (which is unique since currently all Khakis have a Date window on the dial.

UPDATE 2020: the watch as seen in the film is currently made available for purchase (years after the film's release itself). It is now called the and you can purchase it online for $995 at the Hamilton website.

Hamilton gave away some of the 10 watches used in the filming during contests.

Hamilton watches can be seen in many films. View more Hamilton sightings here.

Buy at Hamilton
Buy on Amazon.com
Find on eBay