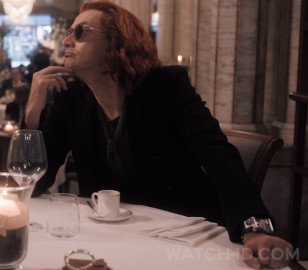 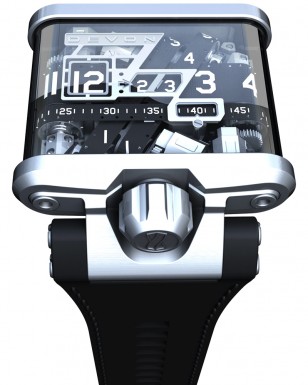 The watch gets a good closeup in the first episode of Good Omen, when the Tennant's character Crowley checks the time when the Hellhound is released (3pm).

The Tread 1 is a unique watch from DEVON Works, with a movement of interwoven Time Belts that displays hours, minutes and seconds.

At the heart of the Tread 1 is an onboard microprocessor, a tiny computer, that controls all of the watch’s functions. It gathers data from a temperature-compensated crystal and a proprietary optical recognition system, which continuously monitors and verifies the position of the Time Belts thereby ensuring steadfast accuracy (the Tread 1 is accurate to within one half-second per day). Lubricant-free ruby bearings are used at the friction points. Power for the Tread 1 is provided by a robust lithium-polymer rechargeable cell that runs for up to two weeks on a single charge. When recharging is required, it is accomplished inductively, without wires, via a charging tower in only a few hours.

The watch is available in different color variations with the steel one being worn in Good Omens.

DEVON timepieces are wholly developed and manufactured in the U.S. Prices for this watch start around $10,000 and sometimes you can find a DEVON Tread 1 on eBay.

Complete the look
David Tennant wears Valentino sunglasses in most of the series (and also Persol in the first eposide) in the same series.