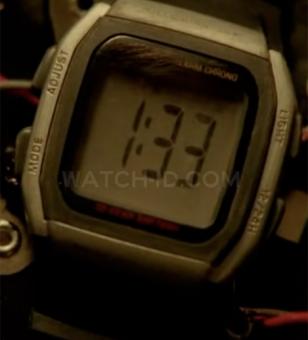 The Casio W96H-1AV used in Lost has been modified to make it unrecognizable.
photo ©
ABC 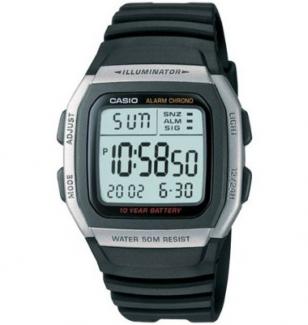 In the final season of the television series Lost, a Casio W96H-1AV casual sports watch with black resin band and silver case can be spotted.

The watch has been modified to make it unrecognizable: the logo has been digitally or actually removed, and the words "ILLUMINATOR" on top and "WATER 50M RESIST" have been scratched off. The words "10 Year Battery" have been blurred, probably digitally. The actual display has been replaced by a screen or custom display for special effects.

The watch is worn by a henchman of Charles Widmore. The henchman is killed and the Casio watch is pulled of his wrist and put to new use by one of the main characters of the series. We don't want to spoil any of the storyline, so you have to watch the series yourself for details. The watch can only be seen in Episode 14 of Season 6 (the last season) of Lost.

The Casio W96H-1AV is still widely available for less than $20, for example on Amazon ($15) and is also available with an all black case (modelnumber W96H-1BV, see here). Both watches have alarm, stopwatch, hourly time signal and dual-time capability, allowing you to see up to 2 times simultaneously or the date with day of the week.

The exact same model watch can also be seen on the wrist of Robert DeNiro in the 2013 movie The Big Wedding.