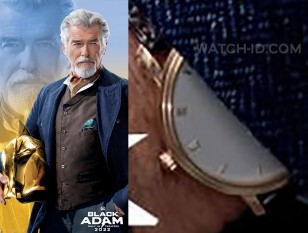 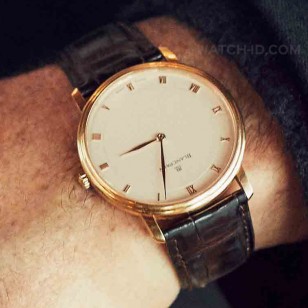 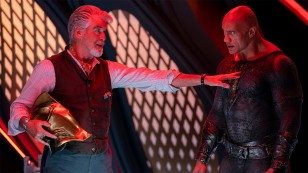 In the Black Adam promotional character poster (see first photo on the left) we can clearly spot Brosnan's Blancpain Villeret watch peeking out from under his sleeve.

There are many variations of the Blancpain Villeret - Brosnan's Villeret has a gold case and a very clean dial with Blancpain logo and narrow and small Roman Numerals. There is no seconds hand, only elegant hour and minute hands. And a brown leather strap.

In a 2022 GQ interview about his personal style "Pierce Brosnan Has All The Secrets", he also wears this same Blancpain Villeret watch, see the picture on the left for a good close up of Brosnan's own watch (photo 2).

Somewhat confusingly, in a video interview from GQ about his style and watches, Brosnan says (at 1m55s) that he wears a "Montblanc" watch in Black Adam: “The watch that I wear in Black Adam, Montblanc, which my wife Keely bought for me. I wear that in the movie and I wear my own wedding ring in the movie playing Doctor Fate.”

Also in a USA Today article Brosnan is quoted: "I wore my own wedding ring, which I never do. And I wore my own timepiece, a beautiful Montblanc timepiece that my wife Keely gave me that is inscribed with, 'Time flies on love's wings.' Those are personal talismans I brought to the character."

There are three possibilities:

1. Brosnan might be mistaken here and meant to say "Blancpain" in stead of "Montblanc". We have never spotted Brosnan with a "Montblanc" watch, while his "Blancpain" watch is worn by him on several occasions and is visible in the promotional photo for the film.

2. Brosnan wears multiple watches in Black Adam, a Montblanc and a Blancpain.

3. Brosnan wore his Blancpain to the character poster photoshoot, and wears a different watch, a Montblanc, in the Black Adam film.

We think it's option 1, but have to wait for a good shot of the watch in the movie Black Adam to determine which watch Brosnan is wearing.

If you have a good screenshot from the watch in the film (or other watches in the film), please submit them here.