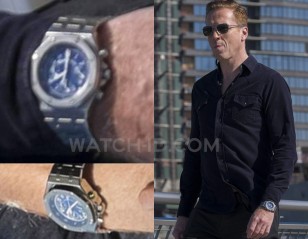 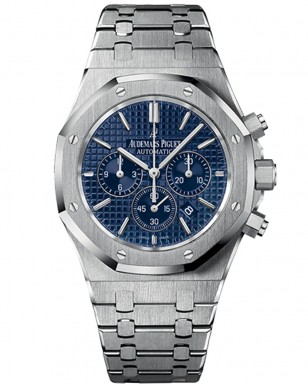 Similar but not the same: the Royal Oak in the tv series Billions has Arabic numerals, which might indicate the watch in the series is a prop watch.
photo ©
Audemars Piguet

The watch has a steel case and blue dial and blue subdials with white hands and indicators. It features time, date and chronograph subdials and buttons. The watch has a (for the Audemars Piguet Royal Oak) typical octagonal bezel with hexagonal screws and crown.

The Royal Oak watch in the series might be a 'fake' prop watch, as the design doesn't match a 'real' Royal Oak. Looking closely at the photo on the left, we can see the watch has Arabic numbers (1, 2, 3 etc) on the dial instead of lines as hour indicators. Also it seems to have a different logo under the 12 o'clock position. The arabic numerals are used on some Royal Oak models, but not one with blue dial and three blue subdials.

In the same series, Damian Lewis wears many other watches including a Cartier Roadster and a blue Audemars Piguet Royal Oak Offshore Camouflage 26400SO.OO.A335CA.01.

Find on eBay
Buy on Joma