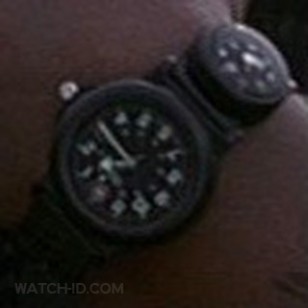 The Victorinox Swiss Army 24242 Renegade watch with Compass in the movie Ghost Dog, on the wrist of Forest Whitaker.
photo ©
Artisan Entertainment 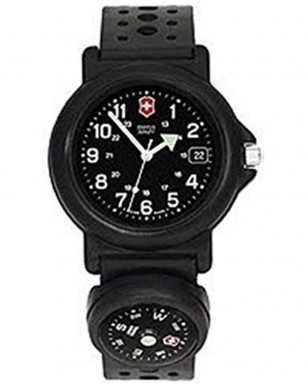 Victorinox Swiss Army 24242 Renegade with Compass
photo ©
Victorinox (with thanks to WatchHunter.org) 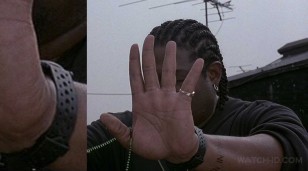 Forest Whitaker wears a Victorinox Swiss Army 24242 Renegade watch with Compass in the movie Ghost Dog: The Way of the Samurai (1999).

The watch has a black rubber band and black round watch case. Attached to the watch case is a smaller black Compass case. The watch dial features the red with white cross Victorinox logo at the 12 o'clock position, and Arabic numerals for hour markers, and a date window at the 3 o'clock position.

The watch is not produced anymore but can sometimes be found on eBay.

Ghost Dog: The Way of the Samurai is a 1999 crime film written and directed by Jim Jarmusch. Forest Whitaker stars as the title character, the mysterious "Ghost Dog", a hitman in the employ of the Mafia, who follows the ancient code of the samurai as outlined in the book of Yamamoto Tsunetomo's recorded sayings, Hagakure. The movie features a soundtrack by Wu Tang Clan member RZA, who also makes an appearance in the film.

With thanks to watchhunter.org for details of the watch.