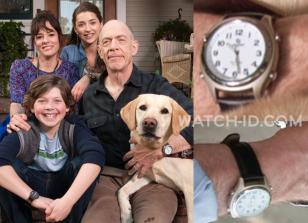 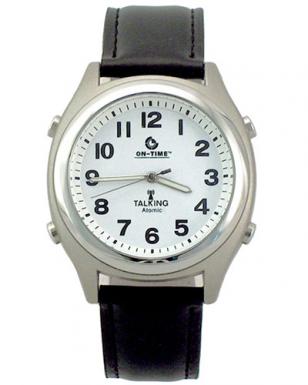 In the tv series Growing Up Fisher, one of the main characters Mel Fisher (played by actor J. K. Simmons), wears an On-Time Atomic Talking Watch.

This watch, by On-Time, is a so-called "talking watch": a watch that tells you, in a pleasant male voice, the time, day of the week or date at the push of a button.

The On-Tme Talking Atomic Clock watch seen in the tv series Growing Up Fisher has a light weight plastic case that is silver finished, a white face with big black numbers, a chrome bezel, black leather band with buckle closure, four touch buttons. This particular watch also has Atomic time setting, which means it automatically shows to correct time based on the atomic clock.

Get the watch on Amazon.com or eBay.

The same watch is also sometimes branded "REIZEN" (also available on Amazon), but the watch in the series is branded On-Time.