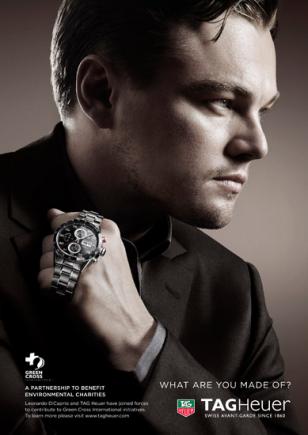 In the “What Are You Made Of” ad campaign, Leonardo DiCaprio sports a TAG Heuer Carrera Calibre 16 43mm Day-Date
photo ©
TAG Heuer 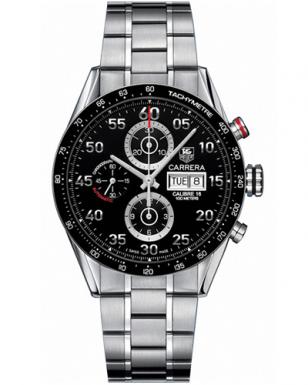 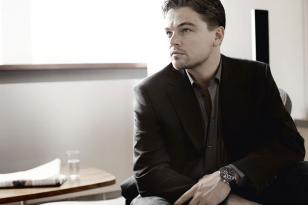 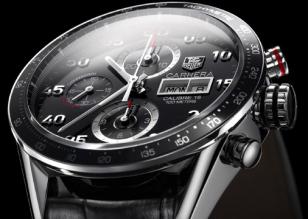 In the 2009 “What Are You Made Of” ad campaign, Leonardo DiCaprio sports a TAG Heuer Carrera Calibre 16 43mm Day-Date. The exact modelnumber is CV2A10.BA0796. His Carrera has a black aluminium bezel, a black dial with 3 registers: chronograph hour at 6 o’clock, running second at 9 o’clock and chronograph minute at 12 o’clock. Hand-applied arabic numerals. Polished-finished hands with luminescent markers on hour and minute hands for improved legibility in darkness. Large day-date window at 3 o’clock. Enlarged crown to remind the stopwatches. Water resistance: 100m. Movement: TAG Heuer Calibre 16 - Automatic Chronograph.

In the movie Inception, DiCaprio wears a TAG Heuer Carrera Automatic which most likely is the result of his partnership with TAG Heuer.

Actor Leonardo DiCaprio has a long history of environmental philanthropy. Co-writer, co-producer and narrator of The 11th Hour, a well-received 2007 documentary on the world’s eco-system, DiCaprio speaks regularly on ecological issues and is a prominent board member of NRDC.

DiCaprio’s commitment to sustainability and children in need will be the cornerstones of his partnership with TAG Heuer over the next three years. In addition, a multi-million dollar commitment from Mr. DiCaprio will go to support environmental charities.

“TAG Heuer is a strong brand with a proven commitment to doing good,” said DiCaprio. “It is a great day when a company as respected as TAG Heuer explores a different way to do business—selling products and giving back at the same time. I’m very excited to start this new partnership."