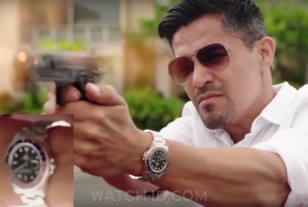 In the original series from the 1980s, Magnum also wore a Rolex GMT-Master II with Pepsi bezel. The watch has a red and blue bezel (the 'Pepsi' bezel), and a black dial. We can't see yet if the watch is a white gold version or a stainless steel watch or from which year the watch is.

We can see the watch in the series doesn't have a jubilee strap, so it's not the new 2018 stainless steel version.

Magnum P.I. was a popular television series that ran from 1980-1988, starring Tom Selleck as private investigator Thomas Magnum, famous for driving a red Ferrari 308 GTS. The CBS reboot stars Jay Hernandez as Magnum. The series will once again feature a Ferrari 308 GTS, as well as many other Ferraris. The new Thomas Magnum is an Army veteran who served in Afghanistan and moved to Hawaii to be a private investigator with a group of his friends.

The Rolex GMT-Master wristwatch was originally designed in collaboration with Pan American Airways and issued by the airline to their crews on long-haul flights. ("GMT" in the name stands for Greenwich Mean Time also known as Coordinated Universal Time). The original GMT Master watch has a 24-hour display fourth hand complication directly linked to and displaying the same time zone as the standard 12-hour hand. This GMT hand enabled the crews to set the watch to GMT or another time zone, and, using the rotatable 24-hour scale bezel, set to the correct offset, a second time zone could be read. GMT or UTC is the time zone that is required for all aviation planning, weather forecasts, schedules and other paperwork.

Buy on Amazon.com
Buy on Jomashop
Find on eBay