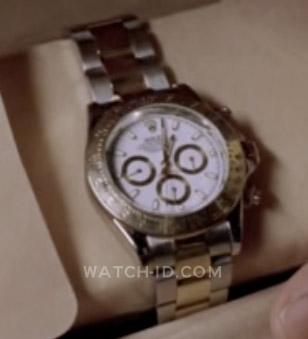 Daniel Dae Kim, as Jin-Soo Kwon, wears a Rolex Oyster Perpetual Cosmograph Daytona in the television Lost. In the first season he is given two of these Rolex Wristwatches by Mr. Paik to deliver to business associates in Sydney and Los Angeles. Jin deliveres the first one, but crashes on the Island before he can deliver the second one. Another character, Michael, finds the  watch on the beach afer the crash, but later gives the watch back to Jin. After the second raft was launched, Jin returns the watch to Michael. Later, Michael pawns the watch at Gus' Pawn Shop in New York in exchange for a revolver. Gus notices the watch's Korean inscription: "Congratulations… mutual cooperation… business development… Mr. Paik". source

A good close up of the watch can be seen in the first episode of Season 6. The watch has yellow gold details and a white dial.

A Rolex Daytona will cost you about $12,000 (or more depending on the exact model), for example this steel version sold by Jomashop or find it on Amazon.com.

On eBay.com there is a large selection of Rolex Daytona watches, click here for an overview of current Gold with White Dial Daytona's.