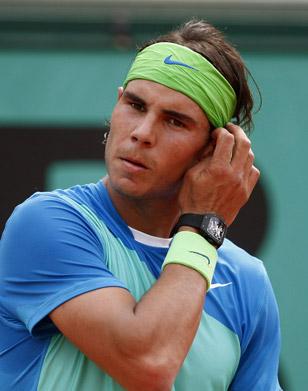 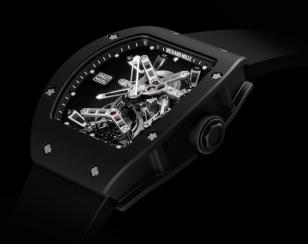 The RM 027 Tourbillon watch, with 20 grams (including strap) one of the lightest mechanical watches ever produced
photo ©
Richard Mille

Spanish tennis star Rafael Nadal has been announced as the next brand ambassador for Richard Mille. Nadal wears a Richard Mille RM 027 Tourbillon watch, which was especially designed for him. Rafael Nadal was also an integral part of the design and testing processes of the watch.

The RM 027 Tourbillon watch, with 20 grams (including strap) one of the lightest mechanical watches ever produced, will officially enter the tennis courts on Rafael Nadal’s wrist, during the 2010 Roland Garros tournament.

The Richard Mille watch is valued at $525,000 and only 50 pieces will be produced worldwide.

Following the example of Felipe Massa who drives every F1 Grand Prix with his watch, Rafael Nadal will play many of his matches from now on wearing his Richard Mille watch on his wrist.

“It is an honour for me than someone like Richard has chosen me as one of his ambassadors. Since the moment we met there was a special feeling. I know that he has worked very hard to be able to create this very special watch. I am honoured and I am sure it will be a special and successful partnership.”, Rafael Nadal said.

“I love Rafael’s personality, his humility, his love and respect for people, his gentleman mentality contrasting his warrior behaviour when on a tennis court. I think that the French audience has not fully comprehended yet the endearing character Rafael Nadal is".

"In terms of developing the watch, he demanded the best, and it encouraged us to go beyond the technical limits. This watch can be described as a typical product of Rafael Nadal, far away from all the marketing products currently in vogue”, Richard Mille said.