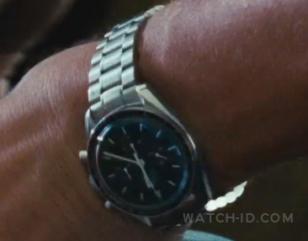 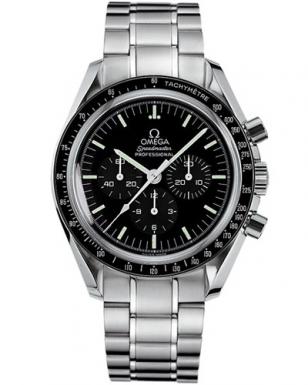 In the movie The Bounty Hunter, actor Gerard Butler wears an Omega Speedmaster Professional, the watch famous for being the choice of NASA for it's space expeditions.

Omega Speedmaster History
The Speedmaster was not designed and built especially for NASA. It had been on sale since 1957, and was, after many tests of many different watches, approved by NASA to be used in space, because of it's ability to resist extreme temperatures, vacuum and zero gravity. The first ever Omega Speedmaster to flight into space was the one worn on the wrist of astronaut Walter Schirra who flew on board the Sigma 7 in 1962. In 1965 the Omega Speedmaster Chronograph received an official NASA flight-qualification for all manned space missions.

The Omega Speedmaster made history when it was worn on the wrists of the Apollo 11 astronauts Neil Armstrong, Michael Collins and Edwin "Buzz" Aldrin, during the landing on the moon in July 1969. For this reason the watch is still widely known as the Moonwatch.

The Omega Speedmaster Moonwatch gained even more fame when it played the crucial role during the dramatic Apollo 13 mission in 1970. After a reserve oxygen tank explosion on board the spacecraft, all the timekeeping mechanisms were not working, except the astronauts wristwatches. Commander James Lovell used his Speedmaster to time the extremely important firing of the secondary rockets to bring the Apollo 13 spacecraft back to Earth.

More images, links an information about the Speedmaster can be found on the Apollo 13 page of this website. The Speedmaster was recenetly also used in the film How to Lose Friends and Alienate People.