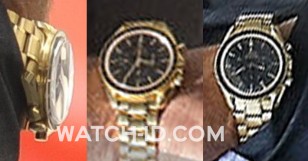 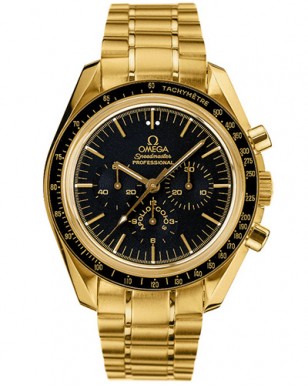 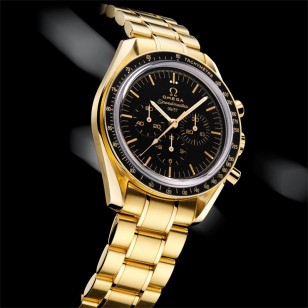 The watch in the film has a black dial, three subdials, gold case and gold bracelet.

From the screenshots on the left we can't be sure yet if this is the a 'standard' gold Omega Speedmaster Professional Moonwatch, or the 25th Anniversary Apollo-Soyuz, reference number 3195.59.00, or the more recent Omega Speedmaster Professional Moonwatch Co-Axial Limited Series 50th Anniversary Edition, reference number 311.63.42.50.01.001.

25th Anniversary Apollo-Soyuz
Ref. 3195.59.00
This is a special edition of the famous moon watch, limited to 50 pieces. The watch is not available anymore.

The watch features Omega 1863 famous manual-winding chronograph movement that was used on the Moon. Power reserve: 48 hours. The case is yellow gold, 42 mm diameter, with a black dial and scratch-resistant sapphire crystal with antireflective treatment inside.

Money Monster
In Money Monster, Clooney plays a successful TV personality Lee Gates who is taken hostage by a viewer, who lost his family's money on a bad tip by Gates. The film is directed by Jodie Foster and also stars Julia Roberts, Jack O'Connell, Dominic West and Caitriona Balfe.

George Clooney is a brand ambassador for Omega and usuall wears Omega watches in his films, see more sightings here. In the film The American, Cloney also wears a Speedmaster Professional.