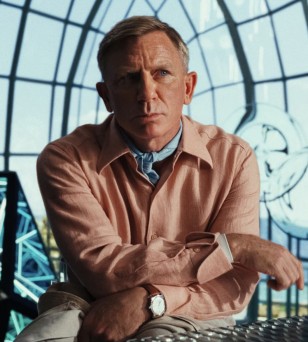 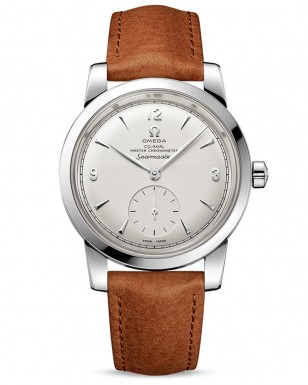 It looks like Daniel Craig wears an Omega Seamaster 1948 limited edition watch in the 2022 movie Glass Onion: A Knives Out Mystery (not yet confirmed).

You can find new and similar looking vintage Omega Seamaster 1948 models on eBay.

It would make sense that Craig's watch is an Omega, since he is a long-time ambassador for the brand. He wore Omega watches in all of his James Bond films and a vintage Omega DeVille in the first Knives Out movie.

Daniel Craig reprises his role as Benoit Blanc, a master detective taking on a new case in Glass Onion: A Knives Out Mystery, the sequel to Knives Out (2019).

In tribute to the very first Seamaster models of 1948, this unique Limited Edition has remained true to the original post-war design, while introducing some very 21st century technology. The series is limited to 1,948 pieces.

The 38 mm stainless steel case houses an opaline silvery domed dial with a small seconds subdial at 6 o’clock, as well as leaf style hands, indexes and a vintage Omega logo all in 18K white gold.

The case-back features a flat sapphire crystal which has been laser-engraved and lacquered by hand with a 70th Anniversary logo, a Chris-Craft boat and Gloster Meteor aircraft. This is in tribute to the aviators and mariners who all placed their trust in Omega's timepieces during World War II.

Presented on a brown leather strap, the watch is driven by the Omega Master Chronometer Calibre 8804, certified at the industry’s highest standard by the Swiss Federal Institute of Metrology (METAS).