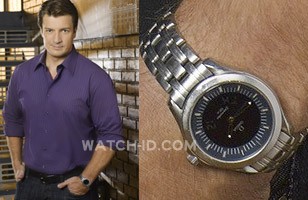 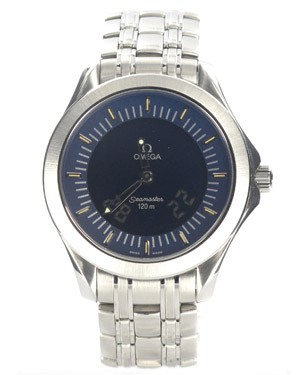 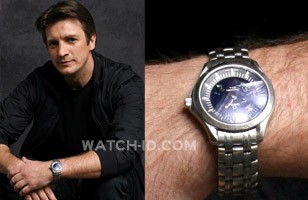 In these promotional images from the television series Castle, Richard Cas­tle wears a rare Omega Seamaster 120m with analog and digital screen, modelnumber 2521.81.00.

This stainless steel Seamaster, with polished bezel and down-turned shoulders has a concealed LCD screen in the black centre of the dial. The digital functions are activated by rotating and pushing the crown. The functions include an alarm, chronograph, second time zone, timer, day, date, and digital time display.

This watch, probably from the early 2000s, is very rare now. You can find several Seamaster 120m watches on eBay. There are also version without the digital screen, so beware of which one you buy.

We are not sure if the watch can actually be seen in the series, if you have seen this watch in an episode, let us know! The Castle actor was spotted at a Comic-con event wearing this Omega Seamaster 120m, so it might be his personal watch. Check out these screenshots from Castle in which the actor wears a different watch and send a message if you can identify that one.

In later seasons of the series, Castle wears Ball watches.